“Ayubowan”, we welcome you to the beautiful island of Sri Lanka. An island like no other on the planet and one that will capture your heart with it’s breathtaking diversity, rich culture and traditions, the magnificent history of over 2500 years and the warm and charming smiles and generous hospitality of it’s people. We are certain that the time you spend mesmerized in the beauty of Sri Lanka will give you the most enchanting and unforgettable memories that will stay with you long after you leave our shores. Located just below the tip of India in the Indian Ocean, Sri Lanka is a foremost tourist destination in Asia with its tropical climate that is warm and sunny as the smiles of her people. The amazing diversity in the scenery of salubrious green mountains, rich paddy fields, endless pristine beaches and spectacular wild life will enable you to enjoy and experience a dream holiday in the paradise isle.

‘Sinhaladvipa’ is the name with which Sri Lanka was referred to in ancient Sanskrit literature meaning the island of the Sinhalese. Sri Lanka’s written history goes back to the 6th c BC to a north Indian prince and his retinue who settled down in the island and established the Sinhalese kingdom. However, fascinating evidence and beliefs extend as far as 2554 BC where Sinhala lore has it that Sri Lanka, or ‘Lankapura’ as the island was known then, was reigned by the great and mighty king Ravana of the ‘Sun race’. This scholarly king is said to have been responsible for many advancements in science and medicine including the renowned flying machine the ‘pushpaka vimana’. 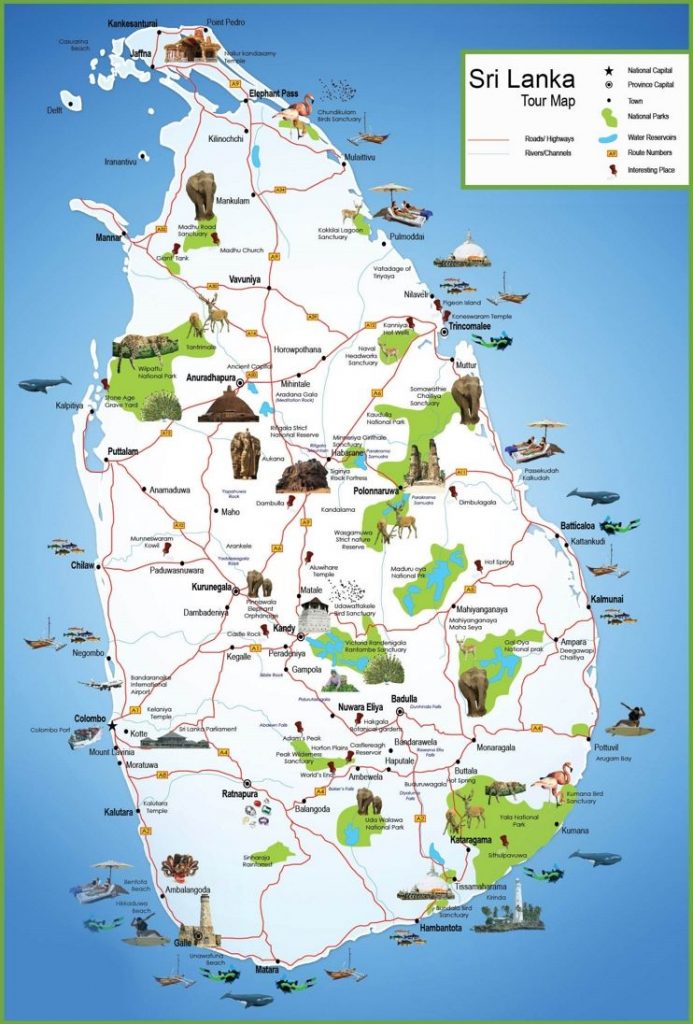 The recorded history of Sri Lanka states Anuradhapura (205 km from Colombo) being established as the first capital with the advent of Buddhism in the 3rd century BC, giving rise to a rich civilization that founded well planned great cities and architectural wonders, great stupas, pleasure gardens as well as magnificent engineering feats and gigantic irrigational works, of which many are still in use today.

The capital shifted to Polonnaruwa (101 km South East of Anuradhapura) and thereafter to other cities such as Dambadeniya, Kurunagela, Kotte and Kandy owing to invasions from neighboring South India. The colonizers from the west first arrived in the island in the 16th century with the Portuguese, in 1505. Thereafter, the Dutch and the British ruled Sri Lanka continuously for a period of nearly 500 years with the Portuguese and the Dutch ruling over the maritime areas of the island for about 150 years each. The British were successful to extend their rule over the entire island with the fall of the Kandyan Kingdom in 1815. Sri Lanka gained independence from the British in 1948, after yet another 150 years.

Sri Lanka is proud of its rich and colorful culture that has been enhanced and enriched by the contribution of many cultures over the centuries. The island is also a rich tapestry of people of many races and faiths.Come explore, experience and discover Sri Lanka with Ebert Silva Holidays, the trusted name in Sri Lanka’s travel and tourism. Let us design your tour package with passion and care so that you have the most enchanting holiday in the resplendent island of Sri Lanka.

Sri Lanka is an island of approximately 65,610 sq.km. and lies in the Indian Ocean off the southern tip of the coast of India.

Warm and sunny all year through with an average temperature of about 27 C in Colombo. You may experience a temperature of as low as 10 C in the hill country. The island has two wet seasons between May and July in the south-west and December/January in the north-east.

Communication will not be a problem as English is understood throughout the island. Places and name boards are also often in English.

Sri Lanka’s standard time is 5 ½ hours ahead of Greenwich.

In Sri Lanka the power plugs and sockets are of type D, M and G.